The European Union launched a fund for Africa on Thursday with an initial $2 billion to combat the poverty and conflict driving migration to Europe, but African leaders said more fundamental economic change was needed.

The trust fund, unveiled at a summit with African leaders in Malta, consists largely of 1.8 billion euros ($1.93 billion) put up by the European Commission, the EU executive, from the bloc’s central budget. The Commission wants member states to match that, but few have pledged much so far.

The new money, which adds to some 20 billion euros annually donated to Africa by the EU and its 28 states, will finance projects ranging from training and small-business grants and combating food shortages to schemes directly aimed at cutting emigration and tackling radicalization and other violence.

With Europeans’ attention now gripped by over half a million Syrians and others whose arrival has plunged the EU into crisis, memories have faded of the drowned Africans whose deaths in April prompted the Malta summit. However, EU officials say that African migration presents the greater long-term concern.

German Chancellor Angela Merkel stressed the summit was only a start: “We have a great deal of work ahead of us,” she said.

Among the biggest concerns in both Europe and Africa is the extent to which climate change, turning vast areas around the Sahara into desert, may set large sections of Africa’s fast-growing billion-plus population on the move, both within the continent and north across the Mediterranean.

Initial direct pledges from the member states, who also fund the EU budget, amount to just 78 million euros, but EU officials expect further money soon. African leaders at the summit in Valletta stressed that its effect would be limited.

“The trust fund is not enough, 1.8 billion euros is far from enough,” said Mahamadou Issoufou, the president of Niger in the Sahel, which faces serious problems with migration and drought.

On Wednesday, EU leaders offered African countries aid and better access to Europe in return for help curbing chaotic migration and promises to take back more of those whom Europe expels.

A 17-page Action Plan sets out dozens of initiatives. Many build on decades of stuttering cooperation between the world’s poorest continent and wealthy-but-ageing Europe.

Some are newer, including a European pledge to reduce costs for sending money home from Europe to Africa — a nod to African governments’ concerns that curbing migration could crimp remittances from expatriate citizens.

These are estimated to bring twice as much to Africa’s economy as foreign aid donations, showing the limits of Europe’s bargaining power in pressing African leaders to hold back emigrants.

EU officials also highlighted renewed offers to ease visas and other access for business travelers and students from countries that agree to take back citizens whom EU states want to expel as illegal aliens. African leaders and many experts question the feasibility of such “returns” programs.

Following the meeting with the Africans, EU leaders will meet among themselves on Thursday, and hear an update on the Commission’s negotiations with Turkish President Tayyip Erdogan to find ways to discourage Syrian refugees from leaving Turkey for the EU.

Officials and diplomats said that EU leaders were likely to agree to a request from Erdogan for an EU-Turkey summit, if such a deal can be concluded, possibly in the coming weeks.

Last week, the European Commission said it expected some 3 million asylum seekers to arrive in the EU by 2017 and that, if they were integrated into the workforce, they would boost the EU’s economic output and even improve public finances in the longer term. 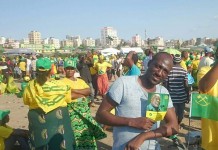