The crackdown on individuals alleged to have participated in the misapplication of public funds in Nigeria continues. This time around, Sambo Dasuki, National Security Adviser to former President Goodluck Jonathan, is facing arrest after what local media is saying is a presidential order. Dasuki is being accused of having stolen about $2bn, funds meant for putting together necessary resources for the fight against Boko Haram. It is alleged that these funds were spend on non-existent contracts.

Nigeria’s President, Muhammadu Buhari was elected into office earlier in the year on the promise of tackling corruption, insecurity and poverty. Despite allocating billions of dollars towards the fight against the military insurgent group Boko Haram, Jonathan’s administration was accused misapplying the same funds and sending ill-equipped troops to face a well organised and well-equipped militant group.

Boko Haram has carried out attacks across much of Nigeria’s central and north eastern regions since 2009 killing an estimated 11,000 people and displacing more than 2 million others especially in the north eastern States. There were accusations that Boko Haram grew in strength, financially and armory, with support from senior military personnel within Jonathan’s administration.

Several media reports also reported that when Buhari sought help from the West to tackle Boko Haram, one condition he was given was to get rid of and prosecute some of the senior military officials who were linked to mass corruption within his predecessor’s administration.

Dasuki is being accused of awarding fictitious contracts worth billions of dollars for jets, helicopters and ammunition for the army to fight the Islamist militant group but they were never delivered. It is also alleged that Dasuki had instructed Nigeria’s Central Bank to transfer close to $150m to foreign accounts without any contract documents.

Since Buhari took over power, significant progress has been made in dismantling the militant group currently hiding in the vast Sambisa forests. This progress has been attributed to quick interventions including the formation of a regional military force, the Multinational Joint Task Force, made up of Nigeria’s neighbours Chad, Cameroon and Niger.

Human rights violations linked to the military in the fight against Boko Haram prompted most Western countries to stop selling arms to Nigeria. This forced Dasuki to look to the East for arms and ammunition. 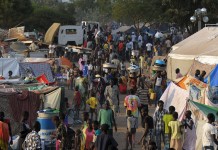