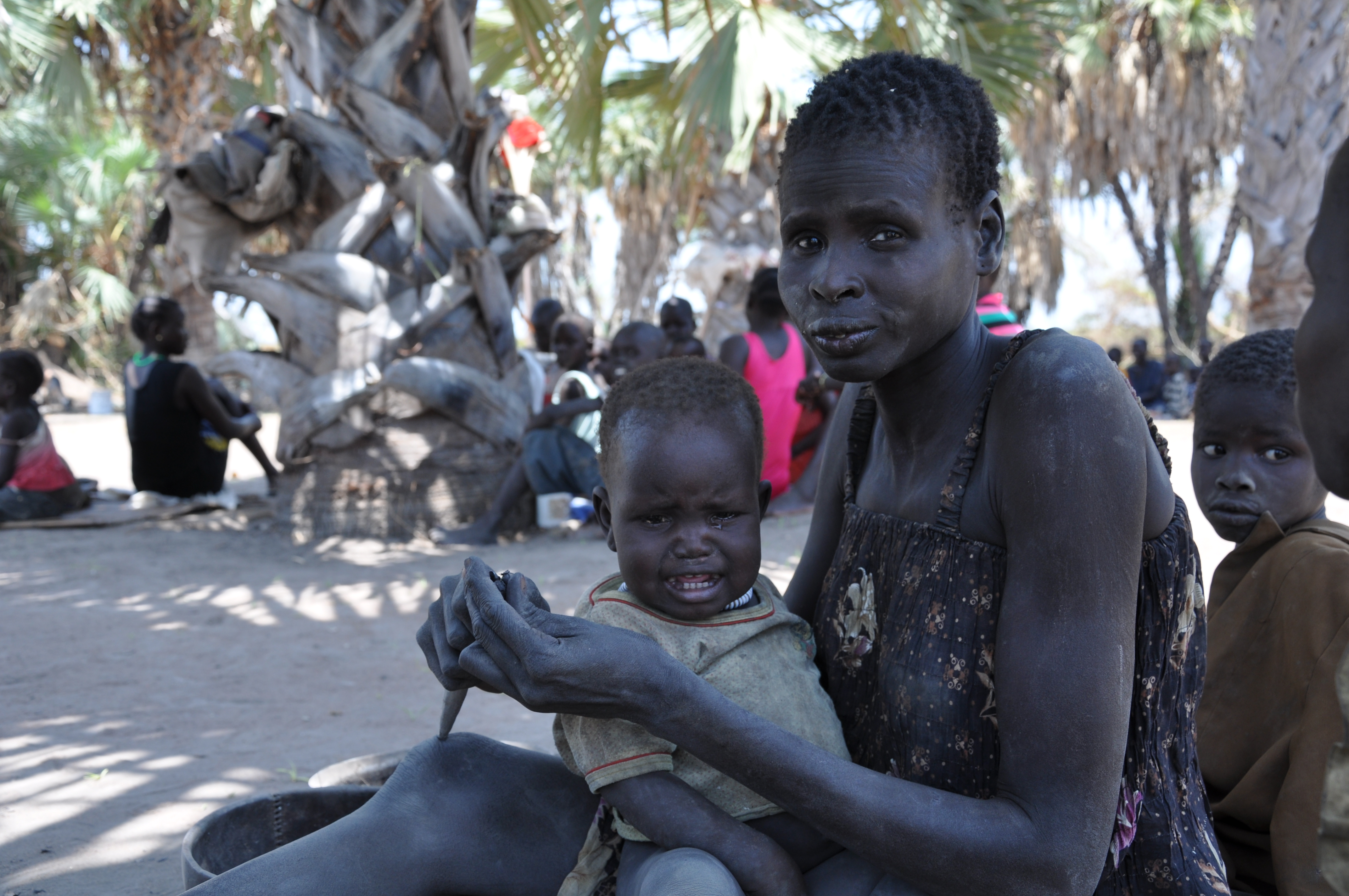 A new report on South Sudan published Friday by the UN Human Rights Office describes “in searing detail” a multitude of horrendous human rights violations, including a Government-operated “scorched earth policy,” and deliberate targeting of civilians for killing, rape and pillage.

Although all parties to the conflict have committed patterns of serious and systematic violence against civilians since fighting broke out in December 2013, the report says state actors bore the greatest responsibility during 2015, given the weakening of opposition forces.

The scale of sexual violence is particularly shocking: in five months last year, from April to September 2015, the UN recorded more than 1,300 reports of rape in just one of South Sudan’s ten states, oil-rich Unity. Credible sources indicate groups allied to the Government are being allowed to rape women in lieu of wages but opposition groups and criminal gangs have also been preying on women and girls.

“The scale and types of sexual violence – primarily by Government SPLA forces and affiliated militia – are described in searing, devastating detail, as is the almost casual, yet calculated, attitude of those slaughtering civilians and destroying property and livelihoods,” said UN High Commissioner for Human Rights Zeid Ra`ad Al Hussein.  “However, the quantity of rapes and gang-rapes described in the report must only be a snapshot of the real total. This is one of the most horrendous human rights situations in the world, with massive use of rape as an instrument of terror and weapon of war — yet it has been more or less off the international radar.”

The new report is the work of an assessment team sent by the High Commissioner to South Sudan from October 2015 to January 2016, in accordance with a resolution by the Human Rights Council in July 2015. It focuses primarily on the worst affected Unity and Upper Nile States, as well as Western and Central Equatoria, where the conflict has spread. While building on earlier reports of the African Union Commission of Inquiry and the UN Mission in South Sudan (UNMISS), the new reports places special emphasis on violations that took place during 2015.

The human rights situation in South Sudan has deteriorated dramatically since the outbreak of the crisis in December 2013. More than two million South Sudanese have been displaced and tens of thousands killed, while the parties to the conflict have yet to establish the Transitional Government of National Unity they promised in the peace agreement last August.  The world’s newest country has known conflict for nearly half its five-year existence and the suffering of its people has been immense.

Since 2013, all parties to the conflict have conducted, “attacks against civilians, rape and other crimes of sexual violence, arbitrary arrest and detention, abduction and deprivation of liberty, disappearance, including enforced disappearance, and attacks on UN personnel and peacekeeping facilities,” the report says. Given the breadth and depth of the allegations, their gravity, consistency and recurrence and the similarities in their modus operandi, it concludes there are reasonable grounds to believe the violations may amount to war crimes and/or crimes against humanity.

The overwhelming majority of civilian casualties appear not to be the result of actual combat operations but of deliberate attacks on civilians, the report says. In towns and strategic counties, the pattern of the conflict has been one of attack, withdrawal and counter attack. Each time an area changed hands those in charge would try and kill or displace as many civilians as they could, based on their ethnic identity.

Some of the most serious abuses took place in the Spring of 2014 in Bentiu and Rubkona in Unity State when armed groups allied to opposition forces entered the towns and killed hundreds of civilians trying to shelter from the fighting.  “Places of refuge … more often than not turned into veritable traps for civilians,” says the report, “churches, mosques and hospitals were not spared from attack.”

Killing, sexual violence, displacement, destruction and massive looting continued unabated throughout 2015.  By then, opposition forces in Unity State offered little or no resistance, and fled in advance of the SPLA offensive, leaving civilians behind. The report contains harrowing accounts of civilians suspected of supporting the opposition, including children and the disabled, killed by being burned alive, suffocated in containers, shot, hanged from trees or cut to pieces. One woman told the team she had been stripped naked and raped by five soldiers in front of her children on the roadside and then raped by more men in the bushes, only to return and find her children missing; another was tied to a tree after her husband was killed and had to watch her 15-year-old daughter being raped by ten soldiers. Several women said they were raped when they left UN protected camps to search for food; others were abducted and held in sexual slavery as “wives” for soldiers in barracks.

The sexual assaults were characterised by their extreme brutality, with women who tried to resist, or even looked their rapist directly in the eye, being killed in some cases.   “If you looked young or good looking, about ten men would rape the woman; the older women were raped by about seven to nine men,” explained one witness.

The prevalence of rape, “suggests its use in the conflict has become an acceptable practice by SPLA soldiers and affiliated armed militias,” says the report. Women and girls “were considered a commodity and were taken along with civilian property as the soldiers moved through the villages.” Some were forced to marry their aggressors; others faced stigmatization and domestic violence when they became pregnant as a result of rape, which has made women reluctant to report the crime. All of this, says the report, suggests rape has been part of an intentional strategy to terrorize and punish civilians.

Children have borne the brunt of the violence, being maimed, raped, recruited for hostilities and killed throughout this conflict, but there was a sharp increase in reported violations in 2015. The UN has received reports of 702 children affected by incidents of sexual violence since the start of the conflict, with some victims of gang rape as young as nine years old. Both Government and opposition forces have used armed youth groups that include teenagers. There are reports of 617 child soldiers being recruited during 2014 but the magnitude of the problem is likely far greater because there are reports that thousands of children were recruited by opposition forces from cattle camps since the start of the violence in Unity State.

Satellite imagery has corroborated accounts of the systematic destruction of towns and villages across southern and central Unity in 2014 and 2015 by government forces and militia. It “suggests a deliberate strategy to deprive the civilians living in the area of any form of livelihood or material support,” concludes the report. In Malakal, in Upper Nile State, in 2014 as many as 9,878 residential structures were destroyed – nearly a quarter of the state capital. Such extensive destruction cannot plausibly be justified by military necessity and appears to be a form of organised pillage. Crop burning, cattle raiding, looting and destruction of food stocks have also led to famine like conditions in Unity State.

Critical voices continue to be silenced; in 2015 at least seven journalists were killed and many activists arrested. “Civil society activists, human rights defenders, humanitarian actors, journalists and print media and even UN staff members have been the subject of threats, intimidation, harassment, detention and in some instances death by the Government.” From April to October 2015, at least 13 humanitarian workers were killed in Unity State alone. In July 2015, opposition forces deliberately shot into an UNMISS site for displaced civilians in Malakal, killing and injuring people who had fled the violence.

The report examines the considerable challenges to administering justice in South Sudan, not least of which is that a country the size of France and Belgium has no paved roads outside the capital. It says there has been, “a chronic failure to ensure a modicum of accountability…with grants of amnesty or immunity being the norm.” Prisons are easy to escape from, court rooms dilapidated, English is the official language of the legal system but few speak it, law books are sparse and judges and prosecutors have fled the fighting. As a result, the report says, there is no memory of the police ever arresting anyone for murder in the capital.

The report recommends that the Human Rights Council continues to monitor developments in the country and considers the establishment of a dedicated mechanism on South Sudan to report on progress towards accountability and on the human rights situation.

The report also calls on the Transitional Government of National Unity – once it is established – to take effective action to stop current violations and abuses of the rights of children, and prevent their recurrence, and to eliminate sexual- and gender- based violence, as well as to promote and respect the role of civil society, including ensuring that the freedoms of opinion and expression, and of peaceful assembly, are guaranteed.

———-
Two versions of the report are available:
– To access the shorter version of the report, please go to: http://www.ohchr.org/EN/HRBodies/HRC/RegularSessions/Session31/Documents/A-HRC-31-49_en.doc

– To access a more extensive version, with detailed findings of the investigation and maps, please go to:
http://www.ohchr.org/EN/HRBodies/HRC/RegularSessions/Session31/Documents/A-HRC-31-CRP-6_en.doc