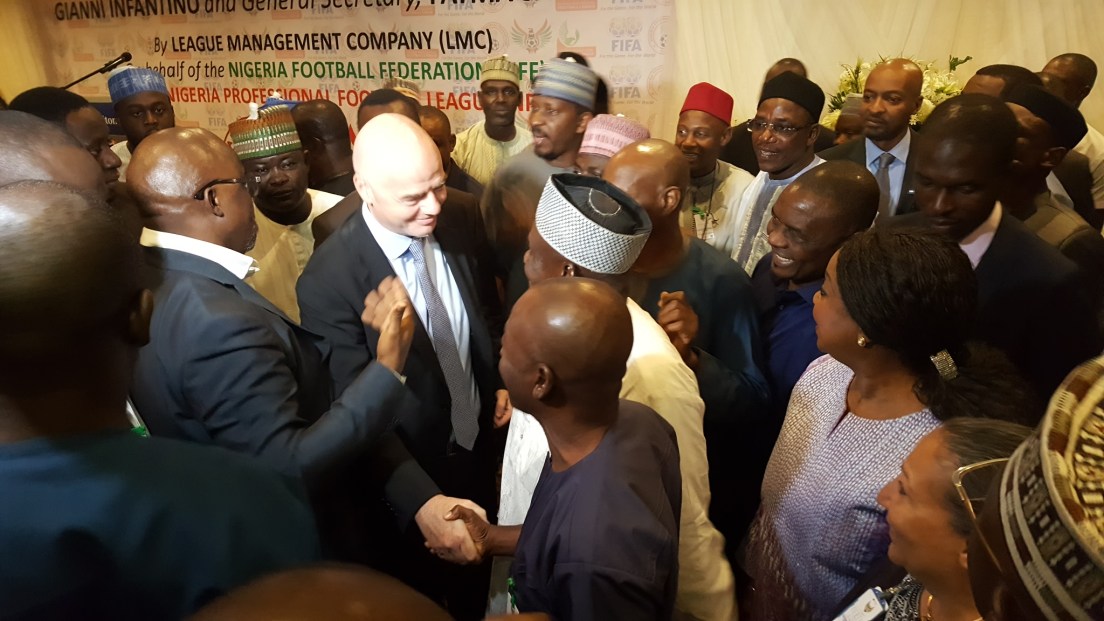 FIFA President Gianni Infantino is on his first visit to Nigeria accompanied by his Secretary General Fatma Samoura. Infantino arrived in Nigeria’s capital Abuja Sunday and has already begun his series of meetings with national football stakeholders in Africa’s most populous nation.

Infantino has continued to say all the correct things – aimed at restoring the image of the football governing body. He has only been at the helm of FIFA for five months, during which period he has begun a cleanup of an organisation previously run by Joseph “Sepp” Blatter who is currently serving a 6- year ban from football.

Infantino has a big task ahead. Even after being elected President in February, he knows that he did not get votes from the largest voting bloc – Africa with 54 Associations always had sympathy for Sepp and his ‘friends’.

However, Infantino chose to stand by his campaign promise of bringing new faces to the world football governing body and restoring it’s heavily dented image. True to his word, he appointed his number two from a completely new and unimaginable ‘ground’ – No one expected it. The new Secretary General of FIFA would not just be a female, but the first from Africa.

Fatma Samoura a Senegalese national was at a time serving as Head of the United Nations in Nigeria. Fatma had only been in Nigeria for less than six but managed to bring a new face to the UN system’s work in the country. She has been praised for her excellent leadership especially in addressing the complex 6+ yearlong humanitarian crisis in the country’s North East.

For Fatma, the visit to Nigeria is a homecoming one. In her brief introduction of the President, she expressed her pleasure to be back ‘home’ and welcomed her boss the local way “welcome to Naija”.

Infantino used his few minutes at the welcome cocktail in Abuja to again emphasise that his was going to be a different FIFA. “This new FIFA is about transparency and accountability” he stated. Although the statement was very well received, comments on social media pointed to need to have ‘cleaner’ Federations at national level.

For Africa, the visit by the President must received with open arms and minds. FIFA been referred to as being Wall Street-like going by comments on social media. Infantino has once said, “to achieve the needed change at FIFA, brave actions will need to be taken”. Africa will be looking at how the new face of FIFA will be looking and how the federations will be working with it’s ‘mother body’.

So far, the bringing on board of Fatma has earned Infantino a lot of potential votes and support from many Confederation of African Football (CAF) members – we hope they are now looking beyond a Sepp-headed FIFA are can support the President and his team in restoring the image of the organisation that runs the continent’s most loved game. The hand rail is going a little faster than the moving...