The Federal Government of Nigeria admitted Thursday that the country’s economy is in recession. It, however,  played down the potential effects it would have on the country’s ‘wellbeing’. Minister of Finance, Kemi Adeosun, while appearing before the Nigerian Senate, said on Thursday that the recession was precipitated by months of ‘negative growth’.

“Technically. If you go into two quarters of negative growth, technically you are in recession. But I don’t think we should dwell on the definition. I think we should really dwell on where we are going,” she added, predicting any recession would be “very short.”

“The policy that we have will ensure that we don’t go below where we need to go,” she told the Senate. The International Monetary Fund had said on Tuesday that Nigeria’s economy would contract by 1.8 percent in 2016 after having forecast a 2.3-percent expansion in April.

The minister said she was “not too worried” about the prediction, as the world body monitors global trends and had also warned about the impact of Britain’s vote to leave the European Union.

“I don’t think we should panic. I think we need to be confident around what we are doing and where we are going,” she told a Senate committee hearing in Abuja. “I remain extremely confident about Nigeria. The IMF has given their projection, which is that we may continue into negative territory. I’m not sure that what we are seeing suggests that.”

On paper, Nigeria is Africa’s biggest economy and depends on oil revenue for 70 percent of government revenue. Oil revenue has been slashed by low oil prices worldwide in the last two years. The situation has complicated the task for the government, which has complained of being left a “virtually empty” treasury by the previous administration and the theft of vast sums of public money.

It has struggled to pay public sector wages, while the local currency Naira has weakened, foreign exchange dried up and investment stalled. The National Bureau of Statistics said this week that inflation rose to 16.5 percent in June the highest for nearly 11 years with predictions it could reach 20 percent by the end of the year.

The Central Bank of Nigeria in May said the recession was “imminent” after negative growth in the first quarter of this year. Figures for the second quarter are expected soon.

Adeosun said she was encouraged by agricultural output and that despite the high headline inflation year-on- year, the rate had slowed month-on- month.

“That tells you that things are moving in the right direction,” she added.

Nigeria’s economic woes have been exacerbated by sabotage to oil and gas facilities in the oil-producing south by militants wanting self-determination for the delta region. That and the forex shortage has hit fuel supplies, driving up costs of imported petrol, diesel and electricity.

But Adeosun said the government decision in May to effectively abandon the fuel subsidy on petrol, which saw prices go up 67 percent per liter, had helped cut government expenditure.

“If you look at what happened in the petroleum sector, before, we were subsidizing around 45 million liters of fuel per day and now without subsidy, it has dropped to 26 million liters,” she said.

“That tells you that all the smuggling that was going out of the country based on the subsidy that we were providing has stopped. “These are real savings to the economy which we are now re-directing into the essential infrastructure that will keep the economy going.” 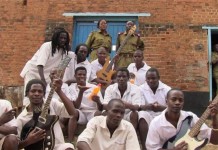